Plenty went wrong for the Mets in 2019, their third straight season without a playoff berth, but the oft-maligned franchise nonetheless turned in a fairly respectable campaign. They got off the mat after an awful start to win 86 games, right-hander Jacob deGrom won his second consecutive National League Cy Young Award, and slugging first baseman Pete Alonso burst on the scene to mash 53 home runs en route to NL Rookie of the Year honors. Aside from Alonso, there were other legitimately encouraging developments among the Mets’ position player group, including the performance of fellow first baseman Dominic Smith. 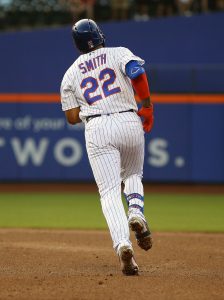 It appeared entering the season that Smith was teetering on the brink of irrelevance, even though he wasn’t far removed from his days as a touted prospect. The 11th overall pick of the Mets in 2013, Smith debuted in the majors in 2017 as one of the game’s 100 best farmhands, but he fell way short of the hype at the outset of his career.