11:13am: The Twins announced Friday that they’ve signed veteran reliever Tyler Clippard to a one-year contract. Minnesota also made its previously reported one-year deal (plus a club option) with Sergio Romo official. The Twins’ 40-man roster is now up to 38 players. 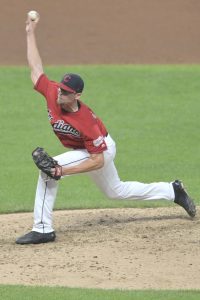 Clippard, an Excel Sports client, spent the 2019 season with the division-rival Indians. After missing the early portion of the year due to a pectoral strain, he debuted near the end of April and generally enjoyed a solid year with the Cleveland organization. In 62 innings — including 5 1/3 unsuccessful innings as an opener — Clippard pitched to a 2.90 ERA (3.89 FIP) with 9.3 K/9, 2.2 BB/9, 1.16 HR/9 and a 31.6 percent ground-ball rate.

Beyond those surface-level numbers, Clippard, 35 in February, excelled in a number of areas. He ranked in the game’s 98th percentile in terms of average exit velocity allowed, at a paltry 85 mph, and his…