Longtime major league outfielder Adam Jones’ time in the bigs may have just drawn to a close. Jones announced on Twitter that he’s signing with Japan’s Orix Buffaloes. He inked a two-year, $8MM contract with a club option for 2022, Ken Rosenthal of The Athletic reports. The deal could max out at $15.5MM if Jones’ option is exercised and the CAA Sports client earns the $2MM in incentives that are part of the pact. 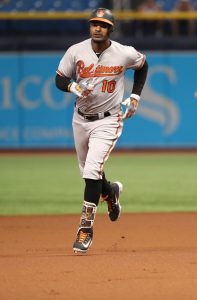 The fact that Jones is heading to Japan now means he’ll avoid a protracted stay on the open market. As a free agent last offseason, the 34-year-old Jones was a victim of a league that has become more and more averse to signing aging players to guaranteed contracts. Jones went without a deal for several months, finally inking a $3MM pact with the Diamondbacks.

Even though Jones jumped out to a great start in Arizona, his numbers and his playing time declined as the year progressed. He wound up turning in a .260/.313/.414 line (good for a below-average wRC+ of 87) with 16…

The San Francisco Giants Should be Admired for Taking a Leap of Faith in Themselves, Rather than Selling (Baseball Essential)

Dansby Swanson is Quietly Coming Into His Own (Baseball Essential)